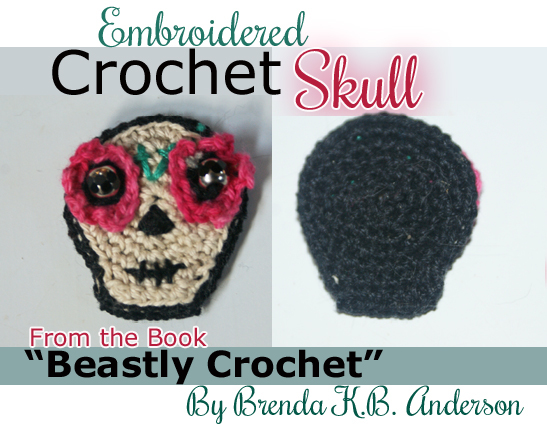 A Crocheted Skull With Bead and Embroidery Embellishments. Designed by Brenda K.B. Anderson; Pattern Crocheted (With Modifications) by Amy Solovay.

If I ever were to see you wearing this crochet skull hair pin, I’d immediately have to ask: “What is that frightful little thing in your hair? It looks like a tiny face with gigantic eyes, and the beady-eyed stare creeps me out. Eeeeeek!”

When I say that he has beady eyes, I mean it literally. They’re eyes that glitter with malevolence. And, they are made out of beads.

I crocheted this skull using an original pattern by Brenda K.B. Anderson. You’ll find this pattern in the book Beastly Crochet,

published by Interweave Press. If you want more details about this book, you can click here to check out my book review.

When crocheting the skull, I was as true to the pattern as possible, but I did make a couple of minor modifications. I deviated from the pattern in the following ways:

Brenda’s pattern originally specified sequins or rhinestones for eyes. These would have been a better choice, but I didn’t happen to have either of these items in my craft supply stash at the time I had the impulse to make my skull. So I improvised. I ended up using faceted glass cathedral beads for the eyes.

After I sewed the beads on, I realized something really wasn’t right about the way they looked, but I wasn’t ready to give up yet. I thought maybe some surface crochet would fix the issue. So I added surface crochet slip stitches in a ring around each eye. To accomplish this, I was crocheting through a couple of layers, both the flower and the skull shape.

The original pattern also calls for craft felt, which I did not have in my stash either. So instead, I crocheted a second skull shape in black thread, and I whipstitched the black skull shape onto the back of the skull face. It looks fantastic, if I do say so myself.

I think it looks nicer this way than it would have if I had used felt, but that’s my personal preference. It also took much longer to do the crochet than it would have taken to slap some felt on the back. I’d say, if you have felt, use it. But if you don’t, this is a great substitute.

Overall, if you’re inclined to wear skulls in your hair, or use them as appliqués, this is a great pattern to have in your pattern stash.

Crochet Skill Level: not specified in the book.

If you’re used to messing around with crochet thread, this will be an easy pattern for you to make. If you aren’t, be aware that thread crochet can be a bit fiddly, and this pattern is no exception. But as far as thread crochet patterns go, this one is an easy one, requiring only basic stitches, plus work in both rows and rounds.

You also need to do a bit of sewing, embroidery and / or gluing to finish the project (depending on what you want to make.) If you’re making a hair clip, gluing is part of the process. If you want your skull to be sewn to something as an appliqué, no glue is necessary.

So there you have it: The Sweet Skull Hairpins by Brenda K B Anderson. If you like these, be sure to pick up a copy of Beastly Crochet so you can make them for yourself.