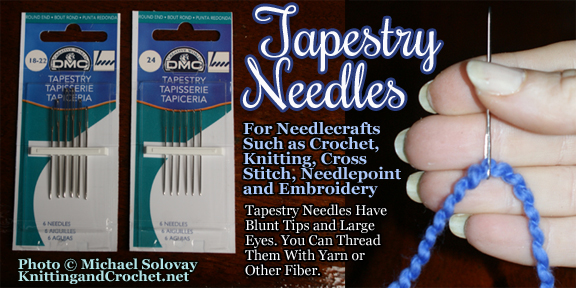 Tapestry Needles for Needlecrafts Such as Crochet, Knitting, Cross Stitch, Needlepoint and Embroidery.

Why You Need Hand Sewing Needles for Knitting and Crocheting

When you knit or crochet, you generate loose ends of yarn that need to be woven into your project. You can use either a needle or a crochet hook to weave the ends in, but I recommend using a needle for best results.

Additionally, you’ll often create pieces that need to be stitched together. For example, if you like to make clothing, at some point you will probably need to sew the sleeves into the body of a sweater. Or maybe you’ll need to stitch some side seams together.

If you like to crochet granny square, you’ll eventually want to stitch them together to make a blanket or other project.

If you ever make fun appliques, they often need to be stitched onto whatever project you want to attach them to.

You might also want to mix a bit of embroidery or stitching in with your knitting and crocheting. You can work cross stitch on top of crochet, and you can also work duplicate stitch and many other sorts of stitches onto your knitting.

Appropriate hand sewing needles facilitate all of these tasks.

Types of Needles Appropriate for Knitting and Crocheting

There are several types of hand sewing needles that are useful to have on hand for crocheting or knitting. You don’t need to have all of these sorts of needles; while it’s helpful to have a wide variety of them, you can accomplish the necessary tasks if you even have one needle — assuming the needle you have is the right size for the task at hand.

Photo collage showing various pictures of yarn needles used for knitting and crochet. Yarn needles are fantastic to use for weaving in ends, sewing seams and other similar tasks. This collage is intended to accompany an article about needles posted at KnittingCrochetCrafts.com.

These types of needles are:

While these needles do have some differences, they also have common elements too: namely, their tips are rounded and blunt enough to be used with knitting and crochet projects, and the eyes of the needles are large enough to accommodate either yarn or crochet thread (depending on the size of the needle you buy.)

When you’re dealing with crochet and knitting projects, you want to avoid using needles with ultra-sharp points. Round-tipped needles are duller and much safer choices for using on your delicate yarncraft projects.

For finishing knitting and crochet projects, these sorts of needles can be used more or less interchangeably. These needles, particularly tapestry needles, are also useful for other sorts of craft projects such as embroidery, cross stitch and needlepoint.

So there you have it: That’s an introduction to needles for crochet, knitting, cross stitch, embroidery, sewing, quilting and other kinds of needlework. I hope this information is useful to you as you determine which needle(s) you need for next craft project.