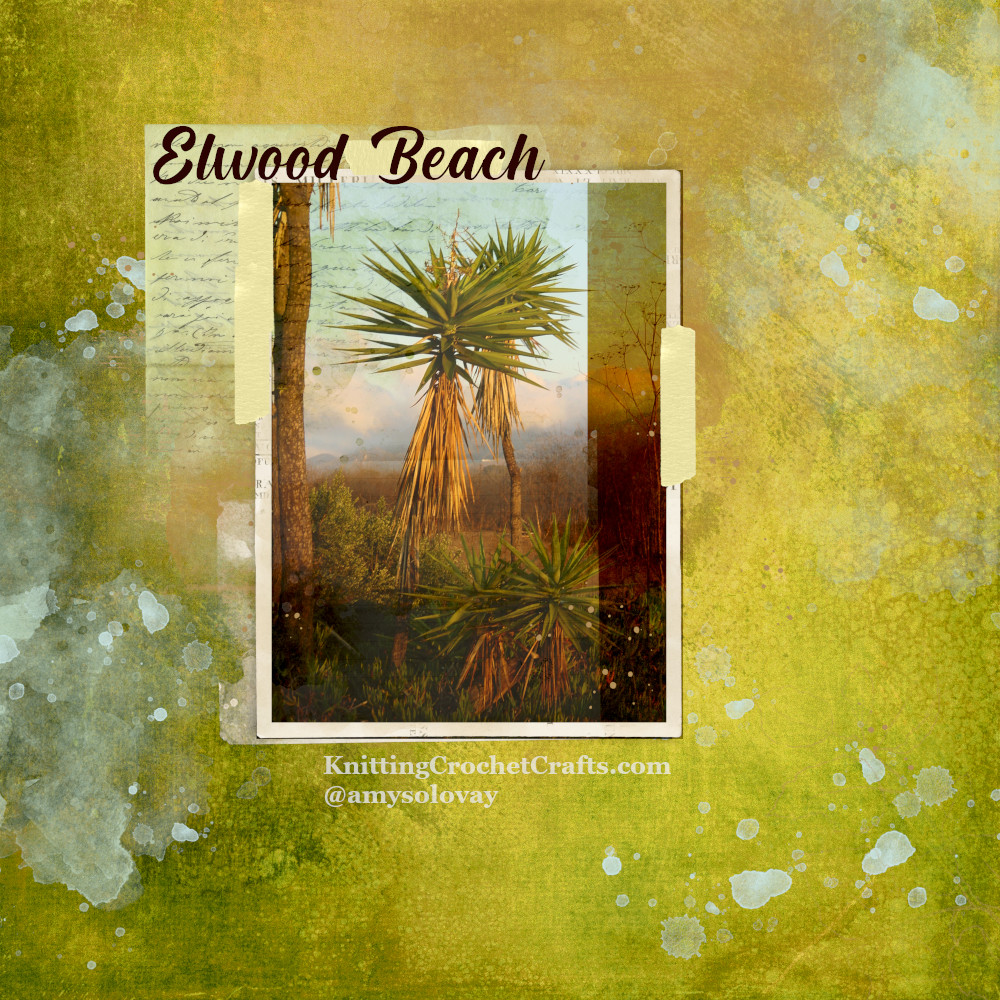 From 2006 to 2009, my husband, Mike, and I lived in Goleta, California. Elwood Beach was basically our backyard; we could walk out our door, down a dirt path through the Eucalyptus trees and be at the beach within moments.

Here you can see one of my favorite views of the beach. I have variations of this same tree photographed, like, dozens of different times.

At the time, Mike and I both had amazing jobs working in Santa Barbara. Mike was working as the sales and marketing manager for a local AV company, and I had a freelance gig helping Big Dogs Sportswear put their summer print line together. I only worked with them during the summer months.

In my downtime during the fall and winter months, I messed around with scrapbooking, making and selling art, building websites, freelance writing and hanging around the beach. Life was just about as perfect as it could be.

Then along came the great financial crisis. Mike and I both lost our jobs at about the same time. We didn’t want to leave Santa Barbara, but we knew we couldn’t stay in the place where we had been living.

We met this guy who told us it was possible to live rent-free in Santa Barbara. He was selling a 1960s Chris Craft in need of restoration. He told us he was anchoring it in Fool’s Anchorage, and he suggested buying it and living aboard.

Well, of course, living rent-free in Santa Barbara was an appealing idea, so we took a look at his boat. However, we knew immediately that buying it would be a bad idea. Even if someone had been willing to invest the time and elbow grease getting that thing looking awesome again, it would take a billionaire to keep its fuel tanks full.

And we realized that staying in Fool’s Anchorage was also a terribly, horribly bad idea. Glad we had enough sense to dodge that bullet.

Later, after we’d bought a different boat, we met a guy, David. David is an experienced seaman who has been sailing since his childhood 60-some odd years ago. We got to talking with him about anchorages in the area. His comment about Fool’s Anchorage: “No self-respecting captain would anchor a boat there.”

Our other friend, Jim, used to live in Fool’s Anchorage. In the wintertime, when the winds would kick up hard, we’d get worried about him. We’d call him and ask how he was doing. He’d respond, “I’m rocking and rolling with the best of ‘em”. He used to drop, like, 200+ feet of chain and a massive anchor for his 34-foot sailboat, and the dude didn’t even have a windless. Even with all that ground tackle, washing up on the beach was a constant threat.

And that doesn’t even begin, really, to describe the insanity that is Fool’s Anchorage. Jim told us horror stories that I won’t get into here and now.

So I said to Mike, “Forget the Chris Craft. Let’s get a sailboat. And definitely forget Fool’s Anchorage. Let’s actually go cruising.”

Mike occasionally goes along with my wild ideas. The rest is history.


The lovely people over at Katie Pertiet’s website are having a blending challenge that inspired this digital scrapbooking layout. I have no idea what I’m doing when it comes to blending, so this really was a challenge for me – but I’m planning to keep messing around with it until I get proficient.

I used Gimp and digital scrapbooking supplies from Katie’s website to create this image. The title font is Cream Cake.

I’m new at Gimp, and so far, it would be incredibly generous to describe my skills in the program as being mediocre. But they’re getting a little better with each project I attempt, and they took a pretty big leap forward with this project (although it occurs to me that is probably not evident just from looking at this piece, which is more of a mess than I’d like it to be…)

Messy or not, I liked it enough to declare this digital scrapbooking layout finished. Thanks for checking it out! I appreciate your interest.

The lovely people over at KatiePertietDesigns.com are having a bunch of inspiring digital scrapbooking challenges this month. I’m working on entering a couple of them. Here you can see my entry for their “one photo, one word” Saturday Scraplift challenge. I’m “scraplifting” a layout by a creative team member, Kate, who goes by the username “OKate” (although my layout actually ended up looking more like Wendy’s). 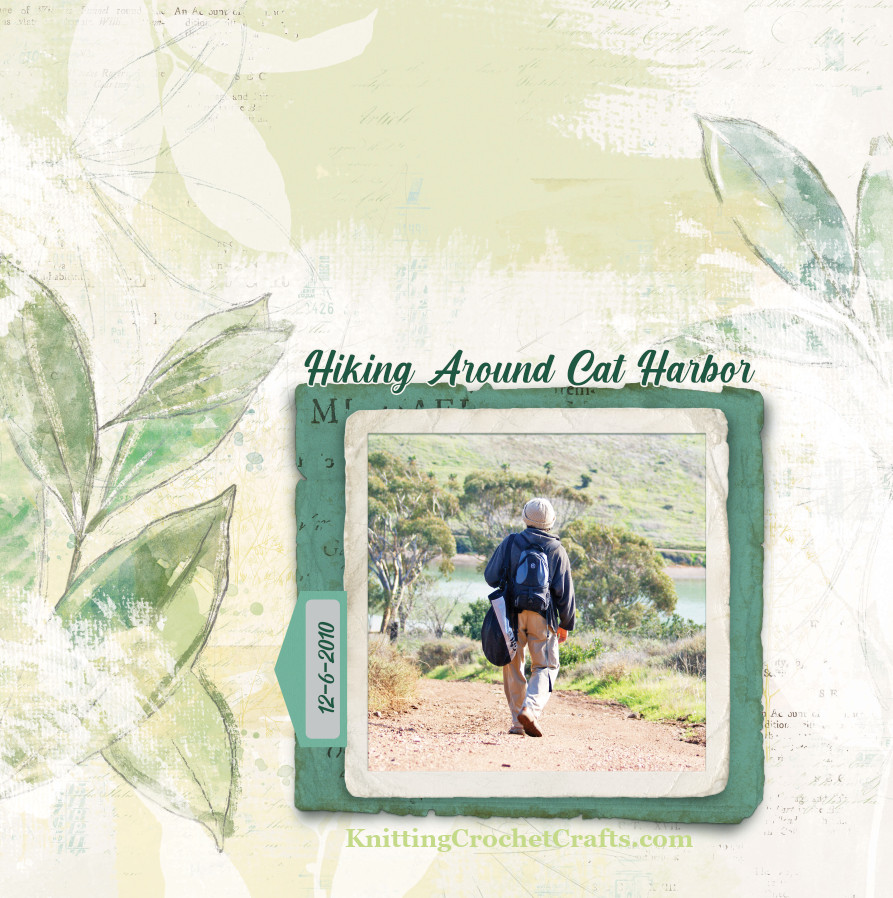 I found this challenge to be an especially challenging one, because the inspiration project is so clean, simple and uncluttered. In theory, I LOVE the clean and simple aesthetic; I was instantly drawn to the inspiration project. But in reality, I don’t typically make scrapbooking projects that are totally clean and simple. When it comes to scrapbooking layouts, I like having more than one photo on the page, and I like to pile on textures and layers. Beyond that, I probably overdo it with journaling — so asking me to keep it to one word was like asking me to keep it to one chocolate chip cookie.

So yeah, I totally failed at living up to the “one word” part of the challenge. I thought about titling this “Cat Harbor”, but even that shorter title exceeds the one-word limit. And I have a few thousand photos of Cat Harbor to scrap (I probably won’t get to scrapping all of them…but I’m glad to have scrapped this one, which is one of my favorites). If I were to title one of them “Cat Harbor”, it wouldn’t be this one — because I have photos where the harbor is really the star of the show, and this isn’t one of them.

But this is still a huge win, because it dragged me out of my comfort zone long enough to come up with a new layout that I wouldn’t have arrived at otherwise — and it’s one that I LOVE.

My heartfelt thanks to Katie, Kate, Wendy, Liz, Candy, Rae and the rest of the creative team over at Katie’s website. I appreciate the inspiration y’all provide, and I enjoyed this challenge.

Supplies You Need for Creating a Similar Digital Scrapbooking Layout

All the supplies I used for this layout are available at Katie Pertiet’s website. I plan to post a list of them shortly, so please check back if this would be of interest to you.


Did you enter any of the challenges at Katie’s website this month? If so, how did your project(s) turn out? You’re invited to make use of the comments area below. 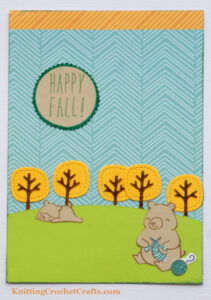 The lovely people over at the Lawnfawnatics Blog are hosting a challenge with the theme of “Awesome Autumn”! Pictured here, you can see one of my entries for this challenge; I made a card featuring cute bears, autumn trees and an expansive turquoise chevron-patterned sky. Hey, why not, right?

Supplies You Will Need for Creating a Similar Happy Fall Card:

I love how this card turned out!

Did you play along with the Lawnfawnatics challenge this time around? If so, how did your card or project turn out?

Did you make a card similar to this one? If so, I hope it turned out well. The floor is open for comments if you have any insights to share. 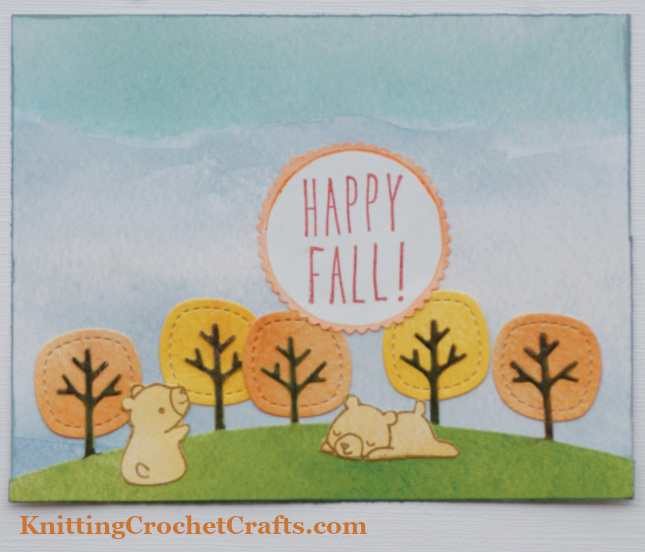 The lovely people over at the Lawnfawnatics Blog are hosting a challenge with the theme of “Awesome Autumn”! Pictured here, you can see one of my entries for this challenge; I made a card featuring cute bears, autumn trees and an expansive blue sky.

In my opinion, the best thing about this card is the soft, watercolor-y appearance of the surfaces made from papers from the “Watercolor Wishes” paper pack by Lawn Fawn. The grass looks so velvety, the trees look so lush, and the sky looks so dreamy thanks to these beautiful papers. This design wouldn’t be at all the same if you just used a solid colored cardstock (I tried making a similar card using different papers, and I do like the results, but I LOVE the look of this finished card much more than I like the other one — and it’s the “Watercolor Wishes” papers that make the most significant difference between the two designs).

Supplies You Will Need for Creating a Similar Happy Fall Card:

I love how this card turned out!

Did you play along with the Lawnfawnatics challenge this time around? If so, how did your card or project turn out?

Did you make a card similar to this one? If so, I hope it turned out well. The floor is open for comments if you have any insights to share. 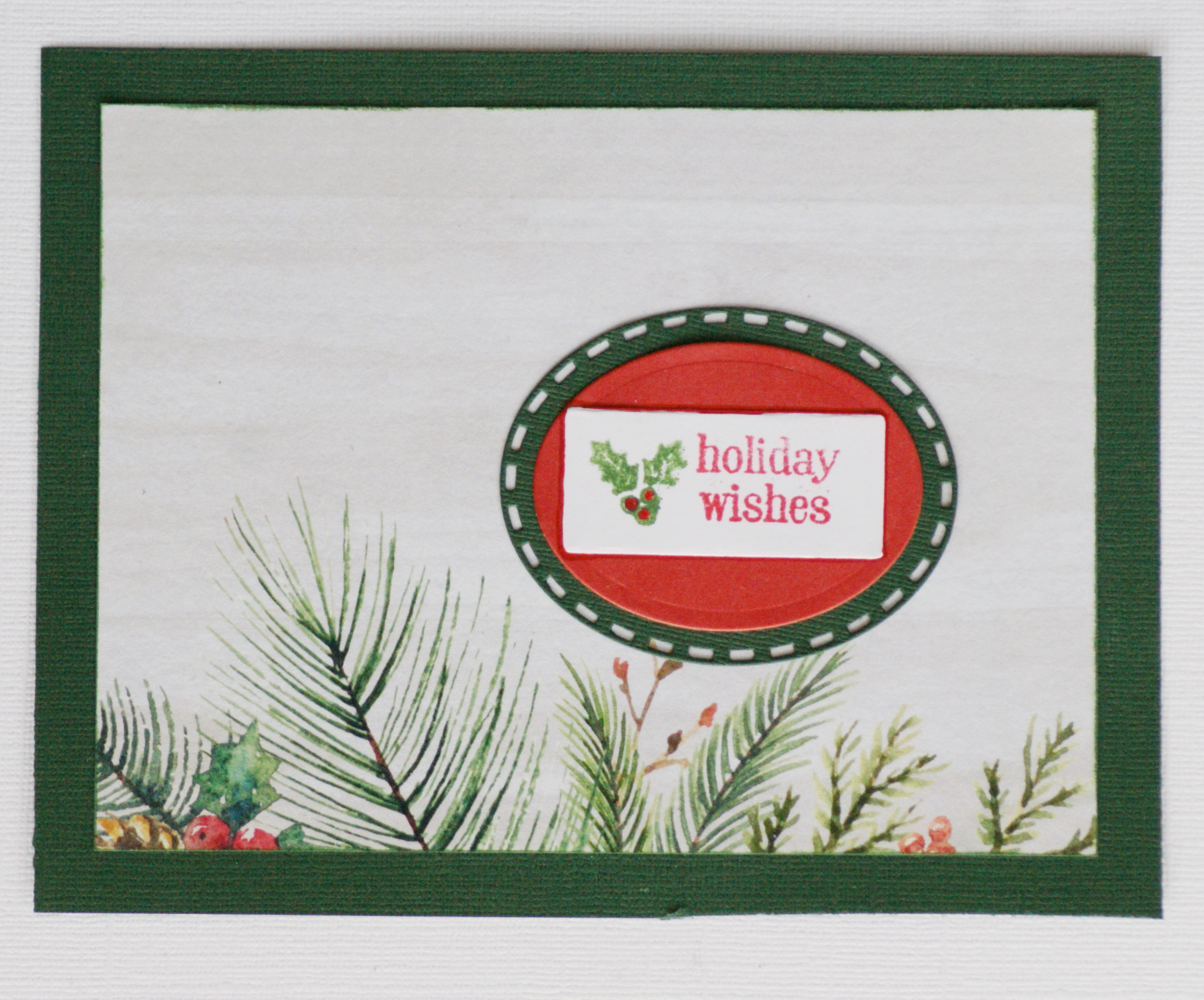 Hello everyone! Here’s my third entry in the Hero Arts “Die-Lightful” paper crafting challenge. It’s similar to the card I posted earlier, with the same Hero Arts holiday sentiment stamp, the same die and the same Christmas-themed papers from the same paper pack.

Thanks so much for dropping by today! I appreciate your interest in my project.