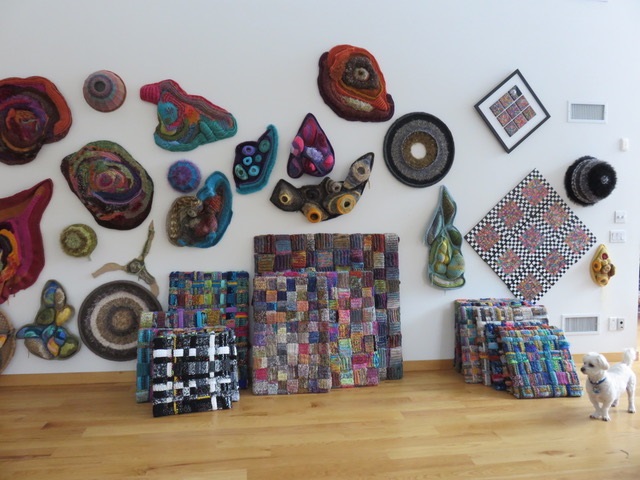 Here you can see a delightful, colorful assortment of freeform crochet art pieces by Ronni Howard. The photo and artwork are both copyright Ronni Howard. I’ve used this photo with her permission.

Traditional crochet and knitting are orderly crafts. Much of the time, when you knit or crochet, you work in neat, tidy rows, rounds or squares in a predictable way — often with certain stitch patterns, elements or motifs that are frequently repeated to form a cohesive project. Many crocheters and knitters work from patterns, and the patterns give them step-by-step, precise instructions for how to create useful projects.

That’s the way you probably learned to crochet or knit — and that may be the way you’re accustomed to working. But, it isn’t the only possibility for how you could approach these crafts.

Freeform crochet is a technique in which you can feel free to eliminate the need to work in neat, tidy, predictable rows or rounds. Instead, you can work your crochet stitches at random. Think random colors, random shapes, random yarns, random patterns (or no patterns at all).

Likewise, with freeform knitting, you can knit your stitches at random.

You can combine freeform crochet and knitting if you like — or you can work in either technique on its own. You can also combine pieces made using other fiber art techniques — flower looming, tassel making, pompoms, weaving, macrame, you name it — to create unique, one-of-a-kind textile art pieces.

The freeform pieces you come up with could be useful items such as blankets, shawls, hats, scarves or purses. However, freeform crochet and knitting don’t necessarily have to result in utilitarian items. Freeform projects can also be art objects such as wall hangings, tapestries, or soft sculptures. And it’s possible to freeform crochet and / or freeform knit using materials such as metal wire — so the resulting items could be jewelry, sculpture, baskets or unlimited other types of objects.

The freeform process does not always have to result in a functional finished item; the exploration process can result in a bizarre piece that serves no practical use after its creation has been completed.

Freeform crochet and knitting can be solitary or group activities. Anyone with basic crochet or knitting skills can participate; no special expertise is required.

“Yarn Bombing” is a related activity in which solitary crafters or groups of crafters leave bits of knitting and / or crochet in public places, much like graffiti. These pieces are often, but not always, done in freeform.

You’ll also need some sort of yarn, thread, fiber or other material to crochet or knit with. In addition to yarn and thread, there are people who use strips of fabric, cut up plastic bags, raffia, twine, wire or other creative materials for freeform work.

Freeform crochet and knitting are excellent uses for scrap yarn. IF you have leftover yarn after knitting or crocheting other projects, you may wish to save it and use it for making “scrumbles” that can be joined into larger and more impressive pieces.

“Scrumbling” is the term James Walters and Sylvia Cosh used to describe their process of making random bits of freeform crochet. This term stuck, and now many other crafters are also using it, along with several other forms of it, as follows:

So, freeform crochet and knitting tip #1: You can use this sort of template for building your project, whether it be a shawl, blanket or some other type of project.

Here are some other freeform crochet tips Jenny has shared:

See the section on freeform crochet books below for more information about Jenny’s work.

Does Freeform Crochet Have Rules?

There’s an often-repeated mantra that “The only rule in freeform crochet is that there are no rules.” But is that really true? Let’s take a moment to pick the no-rules rule apart and see if it holds water.

As a longtime freeform crochet enthusiast, I originally bought into this rule, abandoning all others in the process. I embraced the approach whole-heartedly; it offered me complete freedom, which was, in my opinion, the technique’s greatest appeal.

But, problems resulted. They were all problems that could have been avoided — easily. But I didn’t avoid them, because I bought into the “no rules” rule.

The thing is, there are rules inherent in the universe at large. We all know that, don’t we? And then, there are certain rules that apply to textiles, whether we like it or not. Same as gardening has rules, and so does cooking, and so do many other things.

Let’s say I decided to become a “freeform gardener,” and I further made the declaration that “the only rules in freeform gardening are that there are no rules.” How do you think my experiment would turn out?

Well, perhaps I’d end up with a really cool garden – with an interesting mix of food and flowers and shrubs and trees growing all over the place in a splendid, happy profusion of color.

How about if I decided to become a “freeform chef,” declaring that “The only rules in cooking are that there are no rules.” The consequences of that could be disastrous, possibly resulting in an array of unwelcome results including burned food, indigestion, food poisoning or worse.

The point is, you can ignore the rules if you like, but you do so at your own peril. That’s the biggest problem I see with the “there are no rules” rule in freeform crochet. It simply isn’t true.

So What Are the Rules, Then?

It would be a challenge for me to make a comprehensive list of all the rules that apply to textiles in general, and specifically to freeform crochet. The following are a few of the rules I can think of off the top of my head. I arrived at this list primarily by looking at older pieces of my own freeform crochet work that I was disappointed with because they did not wear well with time. Perhaps you could think of other rules that should be added to the list.

In many cases, you can avoid the above problems by crocheting a small swatch using all the yarns you plan to use in a freeform crochet project; then launder the swatch a few times to see what will happen to it. If it distorts, shrinks, fades, discolors, pills, bleeds, or does anything else that seems strange or undesirable, figure out which yarn(s) are causing the problem and eliminate them from the project.

Alternatively, you can often limit problems by using like fibers – for example, all wool yarns – together in the same freeform crochet project.

I hope this information will help you to avoid some of the costly mistakes I’ve made in my own freeform crochet work.

The Crochet Workbook — This is the classic manual teaching you how to do the freeform crochet technique. Luckily for us, Dover Books has reprinted this — because the first edition of the book is hard to find, and it tends to sell for high prices.

When I was a teenager, I checked this book out of the library dozens of times. It looks a little dated now, but it’s still THE TOP BOOK I’d recommend on the topic of freeform crochet.

Crochet: Discovery and Design by Del Pitt Feldman — I bought this slim black-and-white book when I was in college in the mid-1990s, and I LOVED it. By then, the book was already dated, as it was originally published in 1974. If 1970s design trends are distasteful to you, you could safely skip this book; but if you either enjoy or don’t mind the 1970s aesthetic, you are likely to find this book valuable. If you’re looking for inspiration for making hippie-style festival tops and clothing, you’ll really dig this book! In that case, definitely consider picking up a copy.

I can’t remember exactly, but I THINK this might be the book that taught me the surface crochet slip stitch technique. Regrettably, I parted with my copy of the book a long time ago. That was dumb. I wish I had it back!

I haven’t read any of Jenny Dowde’s books on freeform crochet and knitting, but they look like they’d be interesting:

So there you have it: That’s an introduction to freeform crochet and knitting. I hope you’ll spend some enjoyable time exploring this fun, interesting and creative crochet technique.

About the Author: Amy Solovay is a freelance writer who holds two degrees, one of which is in textile design. She has been crocheting since childhood and knitting since she was a teenager. She enjoys many different knitting and crochet techniques; and freeform crochet and knitting are a couple of her favorites.