Mod Podge is an adhesive you can use for decoupage and other paper crafts.

Mod Podge is one of my most-used adhesives for scrapbooking, card-making, altered art, collage, mixed media art, and crafts. That said, I’m always on the lookout for a better alternative, for reasons I’ll get into momentarily.

Mod Podge is a classic water-based adhesive that was first introduced in the 1960s. (Did you notice the groovy retro-style logo on the Mod Podge jar?)

Mod Podge remains popular with crafters today, due to its versatility, its ease of use and ease of cleaning, and its affordable price. It’s widely available from bunches of different retailers.

Mod Podge is better-known among decoupage enthusiasts than it is among card makers or scrapbookers; this adhesive originally gained popularity because it made decoupage a whole lot easier than it had been before.

I originally found out about this adhesive because it’s also a favorite with collage artists; an exceptionally talented collage-artist friend recommended it to me because she thought it would be a nice addition to the collages I was creating. Thanks to her recommendation, I just had to try it, and I’m so thrilled that I did. I love, love, love it! And I’m happy to recommend it to you as well.

Scrapbookers can take advantage of all the same qualities that make Mod Podge so fantastic for decoupage. With Mod Podge, it’s super easy to create collaged pages with a variety of different finishes — glossy, shiny or matte — and you can use it to simultaneously stick down, “varnish” and finish items in a variety of different surfaces — paper, cardstock, chipboard, die-cuts, embellishments, and so on.

If you want to create artsy, “collage-y” scrapbooking layouts that involve sticking down a lot of different papers, embellishments and elements, Mod Podge is a great adhesive to consider.

If you work with raw, unfinished chipboard, Mod Podge might be your new best friend. When I’m scrapbooking, that’s just about my favorite way to use it. It’s a no-brainer for using it to paper over chipboard embellishments, chipboard mini books, and chipboard album covers. Personalizing your chipboard can be kind of tedious, but in my experience the process goes a lot faster and easier with help from Mod Podge.

Mod Podge is also helpful for fixing certain types of problems that can arise while you’re scrapbooking or paper-crafting.

Let’s say you bought some paper, sight unseen, that you end up being disappointed with — maybe the quality is really poor and the paper just doesn’t look that nice. Mod Podge can usually help fix that. In my experience, Mod Podge can make even the most ordinary surfaces look much more special. It can sometimes turn “ugly” into “interesting” in unexpected ways.

Have you ever put a page together and decided it just didn’t look right? If that happens to you because some of the textures on the page just don’t work well together — maybe you have matte papers with coated ones, plus glossy photos, and some of the elements look out of place — Mod Podge can help with this sort of problem. A final coating of Mod Podge can help to unify the entire page, giving an even finish to the entire layout.

Mod Podge does have a few downsides. It takes a long time to dry. This can actually be a good thing sometimes (like if you are a slow crafter and it takes you a long time to get your pages put together.) However, I don’t recommend this adhesive to super-impatient crafters. If you try to put your layout into your scrapbook before this stuff dries, you will end up with a great big sticky mess. (Patience, patience, patience!)

Drying time varies depending on your location, and, specifically, the amount of humidity in the air surrounding the project. The amount you apply also makes a difference. Thick applications take longer to dry.

Your project might feel dry when you touch it 15 minutes later (for those of you living in dry environments, like California) or maybe an hour or so later for the rest of you. Please don’t be fooled. It isn’t all the way dry after an hour.

In my experience, despite the slow drying time, you don’t want to make a habit of trying to use Mod Podge as a re-positionable adhesive. It doesn’t work well for that. If you stick something down in the wrong spot using Mod Podge, you can sometimes get it back up and move it without any problems, but sometimes you end up ruining your project in the process of moving an element. I’ve had the best success moving things if they only just need a little tiny bit of moving to one side or another; you can just slide ’em along the page a little until they’re in the right spot. I’d recommend that over unsticking and re-sticking an element, but It’s not something I’d recommend doing unless you don’t mind risking the whole project.

Another downside: sometimes Mod Podge bubbles up a little, or curls the paper it has been applied to. In my experience, most of the time everything dries just fine even if there’s some bubbling while it is wet. However, I’ve had a few experiences where the bubbling was severe, and it didn’t go away when the project was dry. The Plaid website has some instructions for dealing with that which I wish I had known about sooner. You can find those here.

Unfortunately, there’s another downside: Mod Podge does not smell that great. Please be sure to only use it in a well-ventilated space. I have yet to find a liquid adhesive that smells like roses… I only know of one way to avoid that and that is to use a tape instead of a glue.

Update 2-18-2022: I have discovered an odor-free liquid glue that you might like to know about. It is not comparable to Mod Podge; in particular, it doesn’t act as a sealant for your finished projects the way Mod Podge does. However, you still might be interested to learn about it in case it would work for some of the projects you have in mind. It’s called Nuvo Deluxe Adhesive. If you’re interested, you can learn more in this detailed product review of Nuvo Deluxe Adhesive.

On a scale of things, Mod Podge doesn’t really smell that bad; there are lots of glues that smell worse.

However, it’s possible that some of your Mod-Podged projects might yellow a bit over time. I had this happen with some projects that I left in a storage unit that was subject to extreme temperatures — high heat during the day and cold at night. I recommend being careful with how you store your scrapbooks.

For that reason, I wouldn’t recommend using it on your only copies of original photographs. I use it with digital photos that I’ve printed out, and can re-print at any time if anything strange and unexpected happens to them.

When You Say That Mod Podge Is Water-Based, What Does That Mean?

Adhesives can be either water-based, or solvent-based. Each type has its pros and cons.

A water-based adhesive like Mod Podge can be cleaned up with water, so that’s one huge advantage. Note that you do have to get to it before it dries, otherwise removing it is a chore. When it comes time to cleanup, the good news is that it takes a long time to dry, so you have time to finish your project and then inspect your work surface afterwards to take care of any little dribbles that may have escaped your attention.

Mod Podge is not a good choice for projects that require a solvent-based adhesive. When it comes to scrapbooking, the only example of this that I can think of off the top of my head is clear acrylic albums and pages. Mod Podge doesn’t always work well on acrylic; in my experience, it seems to work at first, but later you might find it peeling off. Not good.

However, that’s only going to be an issue if you’re working with materials like acrylic. Mod Podge works just fine with the supplies that most scrapbookers use often, and most scrapbooking materials — papers, photos, chipboard, stickers, fabrics, etc.

The Verdict: I Recommend Mod Podge to Other Crafters, With Caveats

I’m delighted to recommend Mod Podge to other paper crafters, with caveats. As I mentioned above, I wouldn’t recommend using it on anything one-of-a-kind or irreplaceable. If you need your project to be archival quality, I don’t personally think Mod Podge is a great choice, because of the possibility for yellowing as I mentioned above. But for quick, fun projects that do not need to be permanent, Mod Podge is fantastic. I’m not aware of any better alternative, and this adhesive definitely fills a void in the market. I love using it for decoupage type projects. Given that, I think Mod Podge is an adhesive that crafters will want to have in their craft supplies stash, and I hope y’all will enjoy using it as much as I have.

Where to Buy Mod Podge Adhesive

If you are planning to give Mod Podge a try, I also recommend picking up a package of sponge brushes as well. My favorites come from art supplies stores or craft stores, because you can get them in a variety of interesting shapes and sizes. However, you can find these just about anywhere that painting supplies are sold, including local hardware stores.

If you wash these quickly after each use, you can re-use them over and over and over again. The Mod Podge washes out of them pretty easily, again assuming that you get to them BEFORE it dries. If you let the Mod Podge dry on them, forget it, it isn’t coming out and the sponge brush is toast.

Have you tried Mod Podge? If so, what did you use it for? How did your projects turn out? Did you enjoy using it, or not? Are there any alternatives you would recommend in its place? We’d love to know more about your experiences with this adhesive. Thanks in advance for any insights you have to share. 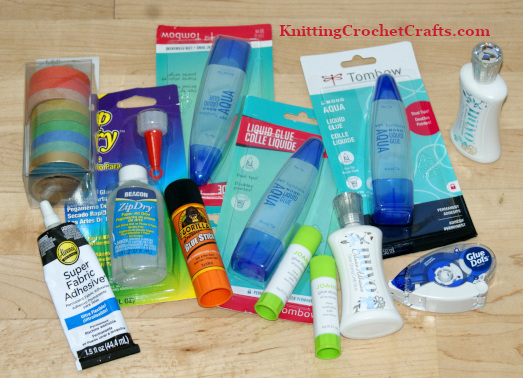