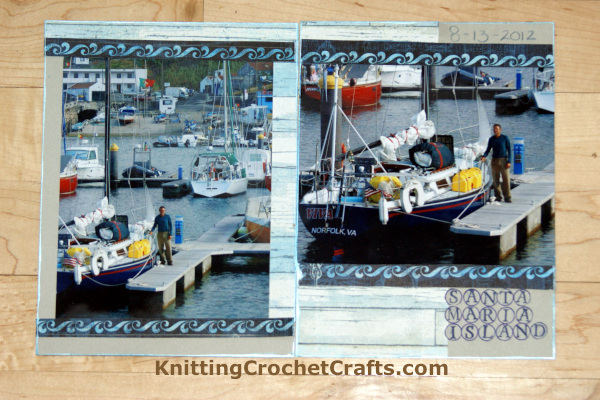 Scrapbooking Layout Featuring Photos of My Husband Mike Refueling Our Sailboat, Viva, Docked at the Marina in Santa Maria Island in the Azores, Portugal

Do you have travel-themed photos that you want to display in a photo book, memory book or mini scrapbook album? If so, here’s some inspiration for a 2-page, 6″x8″ travel-themed scrapbook layout you might like to consider. You’d want to use this layout if you have 2 large-sized travel pictures you’d like to display. The photos I used are both 5″x7″; the one on the left is zoomed out and oriented vertically, and the one on the right is zoomed in and oriented horizontally. I trimmed it down a bit so it would fit on the page.

Of course, you can adapt this layout to other sizes of photos if you want to get creative. There are infinite possible variations of this layout you could try.

Craft Supplies I Used to Create This Travel-Themed Scrapbooking Layout: 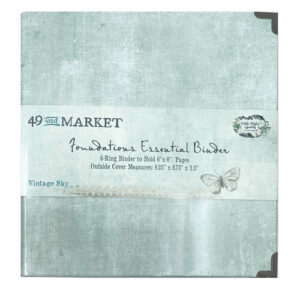 49 and Market Foundations 6×8 6-Ring Binder in the Vintage Sky (Blue) Color; There are also sage green and cream-colored versions of this album available.

The Story Behind This Travel-Themed Scrapbooking Layout

I used to do a lot of scrapbooking and paper crafting back in the years from 2005-2009. Then I took a break from paper crafting, because for one thing, I got a great freelance writing gig working for About.com as their crochet expert, and I also moved aboard a sailboat. Sailing and paper crafting don’t mix well, and crochet consumed most of my time, so my paper crafts took a backseat.

More than a decade elapsed, and in the meanwhile, my husband Mike and I sailed halfway around the world together. Pictured above, you can see Mike in Santa Maria Island, Portugal, which is an island in the chain of Azores that’s out in the Atlantic Ocean.

This is the first scrapbooking layout I’ve made in a long time — I think it might even be the first one I’ve made since around 2010 or so.

In 2008, my husband Mike and I were living in Santa Barbara, California in a comfortable place that was only a quick walk from the beach. I was working at my dream job designing fabric for a local sportswear manufacturer. In my free time, when I wasn’t at the beach, I had been learning to scrapbook and was working at building craft websites. Mike was working as a sales and marketing manager for a local audio-visuals company. Life was just about as perfect as it could be. Those were fun times!

Then the Great Financial Crisis unfolded. Mike and I both lost our jobs, and we were startled to realize we would be homeless in less than 6 months if we didn’t take action.

We made a list of all the possibilities for what we could do next. The list included things like moving back to Los Angeles, which we did not really want to do, but it seemed like the most viable choice. Most of the other items on the list seemed even less appealing. The craziest item on the list was “Buy a sailboat and move aboard it”. We initially were reluctant to even discuss this item on the list — but the more we reviewed the list, the more we realized that this item, although scary, had a lot of appealing things about it. Every time we discussed it, we kept saying, “Well, it’s crazy, but let’s keep it on the list for a little longer and give it a little more thought”. Eventually we came to the conclusion that it was what we were going to do: Buy a sailboat, move aboard it and go cruising.

We bought boat #1, an Alajuela 38, which turned out to not be the right boat for us. It was an amazing boat, and we ended up meeting some really cool people who also own Alajeulas. Alajuelas are exactly the boat you’d want to take on an offshore cruise. The problem with ours that it wasn’t finished, and Mike decided it would take us too long to finish the project. We were eager to get started.

The boat you see pictured above is Viva, a boat that is just as capable for offshore cruising, but is not as beautiful. No matter. We had some amazing adventures aboard her.

We gave notice on our Santa Barbara apartment and wholeheartedly embraced the life of cruising sailors. We didn’t even maintain a permanent spot in a marina to dock our boat; we went totally transient.

People, this was just about the craziest, scariest thing I have ever done in my life — but it ended up turning out okay. In fact, it was better than okay; it ended up being the adventure of a lifetime.

Usually, the majority of the people who visit the Azores are military people (It’s a seriously strategic location, and the USA maintains a significant military presence there), cargo ship captains and crew and some cruising sailors. The islands do get some tourist traffic, but not as many tourists as I would have expected. Santa Maria Island is completely amazing, with more interesting things to see and do than we were able to cram into our short visit. We want to go back.

Now it’s time for me to document our entire adventure by making new scrapbooks. This is going to sound silly, but I’m actually feeling scared out of my mind about doing this. Which is royally dumb! Scary is encountering a violent storm and gale force winds when you’re two weeks offshore and there’s nowhere to go (and yeah, I’ve been there, done that, and was utterly terrified!) but putting pics in a photo album, well, there shouldn’t be anything even remotely scary about that.

Yet, dumb or not, there is no denying that this project is scaring the living daylights out of me. I have been pondering why that is, and I think it comes down to a couple of things:

Its a massive project. I’ve made a few scrapbooks before, but I never really felt like any of them had to be epic. Also, I have a history of not finishing every project I start, and this gigantic of a project scares me with its overwhelming proportions.

Aside from that, I have my heart set on this project turning out impressive and epic. It scares me to think that maybe my paper crafting skills aren’t as good as they need to be to make this project turn out amazing.

The thing about me is, I get scared at really dumb stuff, but I don’t let those fears stop me from doing what I want to do.

When I first started making scrapbooking projects more than a decade ago, I spent about a week looking at different projects at Scrapbook.com and the now-defunct TwoPeasinaBucket.com, plus reading Creating Keepsakes magazine, plus staring at a blank piece of cardstock in actual terror. This is sooooo silly, right? What I was I really scared of? But the truth is, I was scared then, and I am just as scared now. I know, this is completely ridiculous.

I’m now working as a freelance writer, and I’ve heard other writers confess to feeling fear as they stare at a blank computer screen or a blank journal page. I guess the fear I’m feeling is similar to that. Creativity can be scary…

Last time this fear gripped me, I overcame it and made scrapbook layouts — lots of them.

And this time around, when I held this beautiful “Catch of the Day” scrapbooking paper in my hands, I felt intimidated at the thought of cutting into it. I had the ridiculous urge to file it in my paper organizer, crawl into bed, and take a nap instead of getting started on my epic scrapbooking adventure. But I swallowed that feeling and made this layout anyway. So here it is.

In the photos, which are close variations of each other, you can see my husband Mike preparing to refuel our sailboat, Viva. In the photos, Viva is docked in the marina in Vila do Porto in Santa Maria, Island, Portugal. I estimate that it will most likely take at least eight 6″x8″ photo albums to tell the story of our entire cruising adventure. This scrapbooking layout will most likely be housed in album #4, and there will be journaling on other pages in the album. I am still working on putting the story together, but I didn’t want to wait for that to get started on putting the photos in albums.

Off to a rocky start — I sure hope this process gets easier!

Thanks for reading! I welcome your comments, feedback, insights and constructive criticism (if you have any to offer). Please feel free to make good use of the comments area below. I appreciate it that you chose to spend a portion of your day with me.