Looking for information about the picot stitch? Read on for picot stitch tutorials, patterns and definitions and just about everything else you might like to know about picots in crochet, knitting, embroidery, sewing and needlework.

What Is a Picot?

Picots exist in crochet, knitting, tatting, sewing, embroidery, beadwork and even nursing. When people speak of a “picot” in a needlework context, they’re likely referring to a decorative or functional loop typically found on lace, ribbon, tatting, crochet or knitting.

What Is a Picot Stitch?

If a picot is simply a loop, then what’s a picot stitch?

In crochet, a picot stitch is a small, dainty loop that is typically comprised of a grouping of chain stitches that are closed with a slip stitch or single crochet. There is no single precise, absolute, set-in-stone sequence of stitches that comprise a picot stitch; the definition of a picot can vary from pattern to pattern. Sometimes a picot might have 3 chains, and other times it might have 4 or more. Sometimes you’ll lead into the picot by working a slip stitch or single crochet; other times you might lead into it with a complex, varied grouping of stitches. 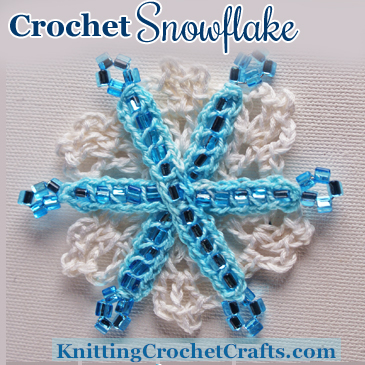 To successfully crochet most picot stitches, you’ll need to have learned the chain stitch, the slip stitch and the single crochet stitch.

Although picot stitches are not difficult to crochet, they don’t always flow easily off the hook. They can be a little bit fiddly, typically requiring the crafter to stop and break the rhythm of crocheting while completing the last step of closing the picot loop. For that reason, some crochet enthusiasts avoid working patterns that incorporate significant numbers of picot stitches.

If you design crochet patterns, it can be preferable to think of other solutions for achieving the same dainty looped effect; it is sometimes possible to substitute another grouping of stitches that give a similar dainty effect but flow more easily off the hook. 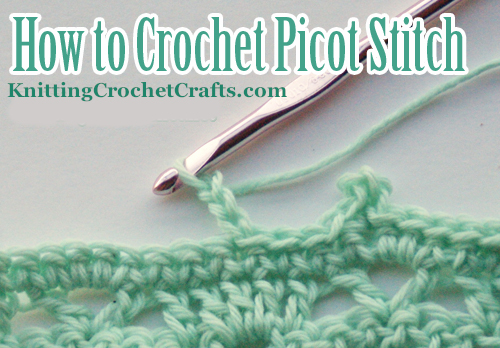 Picot Crochet Instructions — When making a picot stitch in crochet, the first step is to work a group of chains. Chain 3 is the most usual method, but you can use more chains for a larger picot if you like.

Here you can see I’m working along the upper edge of a swatch of crocheted lace. For the first row of my edging, I simply worked single crochet stitch. Then for the second row, I’m working picot stitches separated by several slip stitches. To work the actual picot stitch, I started by working 3 chain stitches (pictured above). Working more than 3 chains results in a larger, more exaggerated picot stitch with a larger loop. 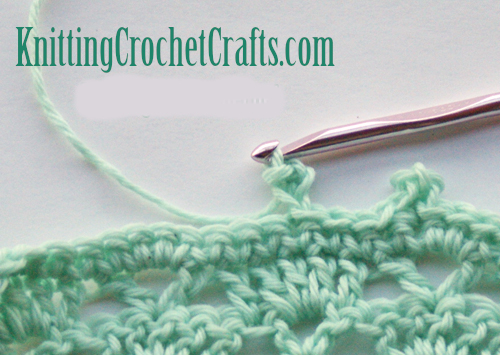 Picot Crochet Instructions — When making a picot stitch in crochet, the second step is to close the loop. One way you can do this is by working a slip stitch in the 3rd chain from hook. Here you can see I’ve worked the slip stitch. 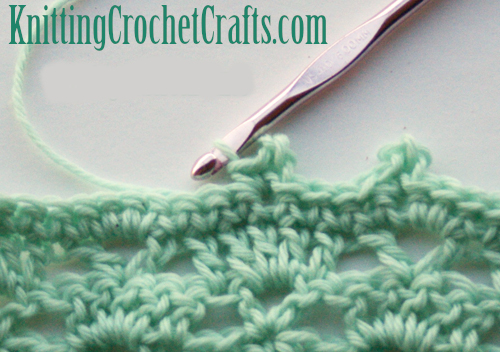 Picot Crochet Instructions — Your picot stitch is complete at this point. What you do next depends on the pattern you’re working from. Here, I anchored the picot to the fabric with a single crochet. Next, I’ll resume working slip stitches. 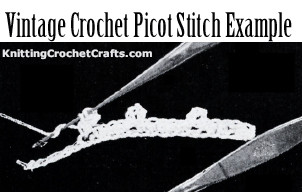 The following instructions were originally published in the Royal Society Crochet Lessons Book No. 9 in 1917. This book is now in the public domain, so there are no legal issues with me reproducing the photo and text of the instructions here for you to work from.

Picot — Make a chain. Skip 3 chains and make a single crochet. Chain four, catch back into the first chain. Wind thread once around needle and pull through both loops. Make three or four single crochet stitches or enough to make desired distance between picots and repeat.

One of the most intuitive ways to use picot stitches: incorporating them into borders, trims and edgings. The following are a few crochet picot edge patterns you might find useful:

If you’re interested in crocheting fabrics that incorporate picot stitches, any of these three lace designs would be an excellent starting point for doing so. Melissa’s stitch dictionary is an EXCELLENT reference, and I highly recommend it to other crochet enthusiasts.

Melody Rogers has shared a free step-by-step photo tutorial for how to knit the picot bind-off at her website, Melody’s Makings. If this is a skill you’re interested in learning, you’re likely to find the large, clear photos in this tutorial helpful.

Knitty has another page featuring several different bind-off tutorials, one of which is a picot bind off. This free tutorial is by Theresa Vinson Stenersen.

In this free video tutorial, Susan B. Anderson demonstrates a knit picot edging you can use for blankets, baby hats and a variety of other knitting projects.

Picot Cast On for Handknit Socks

Picots make a lovely decorative edge for knitted ankle socks. Here’s a free tutorial teaching you the picot cast on when working with double-pointed knitting needles.

Several embroidery enthusiasts have shared helpful tutorials teaching you how to do woven picot stitch:

In this free woven picot stitch flower tutorial, Jacob at the Modern Folk Embroidery website demonstrates how to stitch a three-dimensional flower motif.

What is a picot hem? — See photos at The Dreamstress website.